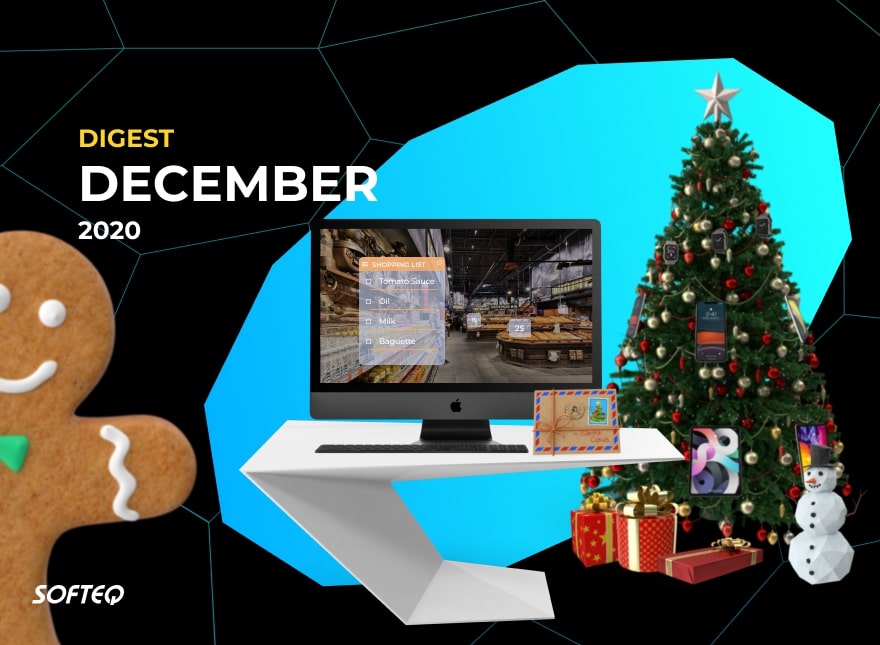 In this issue of the Tech Digest: Artificial Intelligence will infiltrate 80% of all IT systems by 2022, the SolarWinds security breach reveals how sophisticated and threatening cyberattacks can be, and virtual stores bring back the joy of Christmas shopping during the lockdown. All that and more in a 10-minute read.

The US government takes drastic measures to fortify IoT security

Back in November, Donald Trump finally signed the long-anticipated Internet of Things Cybersecurity Improvement Act, which had been in the works for almost three years. The legislation is expected to standardize security requirements for billions of connected devices invading our homes and offices. Brad Ree, CTO at the Global Standard for IoT Security (ioXt) alliance, sees the act as an opportunity for consumer electronics companies, tech startups, and government agencies to finally come together and define security standards for IoT devices across different product categories. If implemented fully, the new guidelines will reduce the risk of advanced ransomware and DDoS attacks caused by botnets, which grew by 223.53% in the first six months of 2020.

Artificial Intelligence is set for another good year

Artificial Intelligence has been a hot topic this year. From intelligent drones delivering blood samples to rural areas in Africa to medical devices that help hospitals monitor patients remotely, the technology is finding a home in all types of IT solutions. According to Gartner’s CIO Survey, 37% of companies already use some form of AI to optimize and automate business processes. And next year, things will only get better for Artificial Intelligence. Check out our latest blog post to learn what 2021 has in store for AI professionals and companies undergoing Digital Transformation.

Looking for Artificial Intelligence Experts?
Learn more about our ML and AI solutions!
Tell me more

The US boasts record 5G coverage — and record-low download speed

With this turbulent year drawing to a close, we can safely assume 5G has taken off—this time for real. According to a recently published report from Speedtest, the next-gen mobile network has already been deployed in 99 countries, including the United States and most of Europe. While America is clearly winning the 5G coverage game with a total of 7,583 cities (that’s 50% of all cities and towns where 5G has been introduced so far), the country is falling behind in terms of median download speed, which is 10 times slower than in Norway or South Africa. Experts attribute the unimpressive 64.11 Mbps speed to the fact that most US carriers opted for low or mid-band 5G to accelerate their rollouts. Now that T-Mobile and Verizon have announced plans to implement the mmWave technology through 2021, we can soon expect faster and more stable connectivity in most locations, both indoors and outdoors.

The SolarWinds accident could be a catalyst to rethink cybersecurity

Earlier this month, SolarWinds, an Austin-based company that manufactures IT management software for government agencies, hospitals, accounting firms, and universities, has fallen victim to Russian hackers. An unidentified group of cybercriminals managed to inject malicious code into a routine networking software update. Called Orion, this software is used by 80% of Fortune 500 companies, including Deloitte, Intel, and Nvidia. And although there’s still no evidence the hackers actually used the backdoor to access the companies’ networks or tamper with sensitive data, this attack is likely to have a lasting effect on cybersecurity practices. As firewalls and antivirus software are starting to show their limitations, more companies will realize the importance of hardware-enforced protection of IT and OT networks. Another lesson to be learned here is that advanced intrusion detection systems like Einstein fail to ensure the desired level of protection when faced with seemingly legitimate software updates. Last but not least, companies should continuously educate employees on cybersecurity: out of more than 18,000 firms targeted by the Orion hack, only one company spotted malicious activity and raised the alarm.

The Internet of Things’ e-waste problem is not inevitable

Unless you’ve been living under a rock for the last five years, you probably have a box of old smartphones, Internet-connected speakers, and thermostats gathering dust in the attic. Most likely, these gadgets are still in pretty good shape; it’s just that the companies that manufactured them have either gone out of business or stopped issuing software updates. Although some consumer electronics giants like Dell and HP collaborate with recycling centers to reduce e-waste, we humans still produce 2.5 million metric tons of electronic waste annually—simply because gadgets that are designed to last decades are now used for only a couple of years. In an IEEE Spectrum article, Stacey Higginbotham proposes a simple yet effective solution to the growing e-waste problem.

Although virtual stores have been around for years, it wasn’t until the pandemic kicked in that we came to appreciate the joy of walking down the aisle and picking up chocolate bars from a physical shelf. Unlike augmented reality catalogs and e-commerce websites, virtual stores use 3D renderings or photographic images of real-world objects to actually simulate reality. Using a zoom-and-pan interface, customers can click their way around a digital store, walk up to virtual shelves, browse information about specific products, and add items to their carts. Sally A. Applin of Fast Company has done some late Christmas shopping at a virtual Cost Plus World Market store—and here’s what she thinks.

How local legislation undermines the very notion of cloud computing

Making data available to anyone from anywhere in the world is a cloud computing fundamental—and a key ingredient to its success. Following the introduction of local regulations demanding companies to store certain types of data within a country’s borders, the $371.4 billion industry might slow down its record-breaking growth. A recent article by MIT Technology Review takes a closer look at cloud balkanization, which is a side effect of the “digital sovereignty” laws prohibiting businesses from working with foreign cloud computing providers. Read the full story to learn how Amazon and Microsoft are adapting to the new reality and what will happen to smaller companies that build their products and services on top of AWS and Microsoft Azure platforms.